When people hear my full name, they expect to meet an Irish boy. Instead they meet a Korean girl. Welcome to interracial adoptee life.

Generally speaking, I love it. I have little identity crises here and there in which I feel like a “bad” adoptee or alienated because the dichotomy between what I look like and who I am is impossible to define in rigid terms. But mostly, I love the fluidity. People often have a hard time when they can’t decide how they want to define me: Asian? White? American? It makes them uncomfortable, and they struggle to place me somewhere familiar. Unfortunately for them, I exist in no-man’s land, in the delicious fog lingering between fixed identities.

I enjoy it, truly, but it can be hard to embrace my adoptee identity in day-to-day life, where I’m frequently plagued by a number of obnoxious inquiries including but not limited to:

I’m from the Jersey Shore. I’m from New York. I’m from the United States. My identity is not determined solely by the fact I was born in South Korea, the same way anyone’s birthplace or current place of residence is not the only shaper of his or her identity. And yes, I am Korean, but no, I can’t understand or respond to you in Korean; I’m adopted. “Oh! Adopted! How old?” I was four months old when I came to the United States. When I was a baby, someone in a grocery asked my blonde-haired, blue-eyed mother if I would be able to speak English when I grew up. True story.

People have also obtusely asked, how much did I cost? I can’t answer that. I don’t know what monetary exchange was made that allowed my parents to bring me home. I also know that I don’t routinely ask anyone how much it costs to go through pregnancy and labor. In terms of publicly available information, I know it’s considerably more expensive to adopt internationally than domestically, and that adoption and transfer of guardianship aren’t exactly the most regulated things. I know that I’m incredibly lucky to have the amazing parents I have.

These amazing parents, the man and woman who raised me, are my real parents, and it pains me that anyone might consider them to be anything other than “real.” Biology isn’t everything. I may not have my Irish-Norwegian father’s blue eyes, but I have his dry sense of humor, his interest in the humanities, his love of a good story. I don’t have my mother’s blonde hair, but I have her insatiable need to help others, her need for laughter, and, I hope, at least a fraction of her thoughtfulness. They give me their unending love and support. These are my real parents.

And, my real parents, like all other real parents, deserve their privacy. We don’t ask people why they decide to procreate. Society insists we live by this myth that all people want children and a person’s life is incomplete without experiencing parenthood, yet people feel the need to question why adoptive parents want to raise children. Both this myth and line of questioning are problematic, to say the least, and to demand specific reasons a person wants children is intrusive and flat-out rude.

Perhaps some adoptees have asked their parents what circumstances led them to adopt, but I strongly believe it’s none of my business, why my parents chose to adopt. Besides, how is that conversation supposed to go? “Hey, did you decide to adopt because you were molested as a child and haven’t been able to have a sexual relationship with anyone since then? Just curious.” Some people stammer, “Oh, I thought they might just have told you.” Told me what? “Hey honey, in case you were wondering, I’m sterile, so that’s why we decided to adopt you. Have a good day at school!” No. This is no one’s business but theirs.

That’s the bottom line. It’s none of your business, who an adoptee’s birth parents are, where an adoptee was born or why their adoptive parents chose to adopt. If an adoptee offers to tell their story, they deserve to do it on their own terms and share only what they are comfortable sharing.

There is a difference between asking to learn about the adoption process and probing the deeply personal details of someone’s adoption, and the latter is — or rather, should be — socially unacceptable. I don’t need to share the history of my adoption with you just so you can determine which label fits me best, which box I belong in, which cultural and racial identity you want to assign me. My identity is my own, and this is my story, on my terms. I determine where I fit, and that’s here, in the United States, with my real parents. 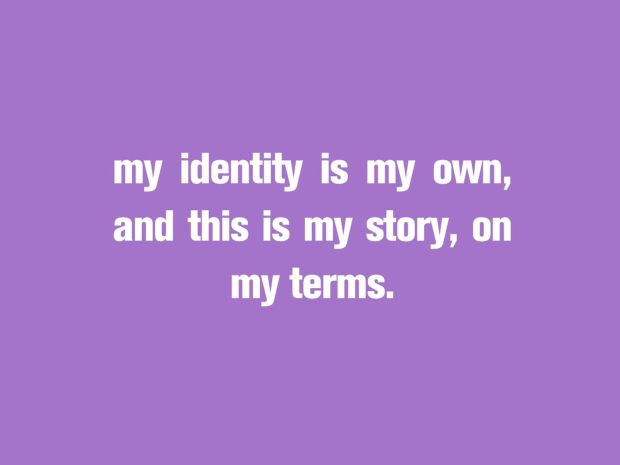